Eduroam
Delegates associated with an institution belonging to Eduroam can use the local Eduroam WiFi service using their own credentials (username and password), without any other formality.
http://www.unibo.it/en/services-and-opportunities/studying-and-beyond/wi-fi-wireless-connection/eduroam-education-roaming

ALMAWIFI
Delegates not associated with an EduRoam member institution can request a temporary account for ALMAWIFI (the Wi-Fi service of the University) from the registration desk. This link points to a description of the service and to the configuration instructions.
http://www.unibo.it/en/services-and-opportunities/studying-and-beyond/wi-fi-wireless-connection/almawifi

Central Bologna, essentially the old walled city, is best understood as a clock.
The relevant portions of the University are located at approximately 14:00 (or 2pm).
The Bologna Central train station can be found at high noon.


Two primary features at the center of the clock are:
- Piazza Maggiore, the central public square of the city, located directly in front of Bologna's Basilica Petronio.
- Bologna's two (leaning) towers, located three blocks due east of Piazza Maggiore.

Most of the primary roads in the center radiate out like spokes from the Piazza Maggiore hub. To walk to the University from the Best Western Hotel San Donato (Google Map Link), located right behind the two towers (due torri), simply travel away from the city center along Via Zamboni. The hotel's address is Via Zamboni #16, and the University's Department of Mathematics, the site of Working Group and POSSE activities on Saturday and Sunday, is at the other end of Via Zamboni - Piazza di Porta San Donato #5 (Google Map Link).
Piazza di Porta is a piazza at the junction of Zamboni, the road going around the circumference of the city (a Tangenziale) and Via Inerio (a non-diameter chord).

Sunday Night Reception, July 2, 7:30 to 9pm
Osteria del Sole
Vicolo Ranocchi 1/D
GPS 44.493949, 11.344408
Google Map Link
This Osteria, one of the oldest in all of Italy, is on a side street, located in the heart of Bologna's food district, between Piazza Maggiore and the due torri. From Piazza Maggiore, head east along Via Pescherie Vecchie (the "old fish street"). Take your first left onto Vicolo Ranocchi. The Osteria is half way down the first block. There is no signage marking Osteria del Sole beyond an ancient overhead inscription of "VINO."

Conference Venue
Belmeloro Complex
Via Belmeloro 14
GPS: 44.495117, 11.356161
Google Map Link
The conference venue is located in the heart of the University district. Walking directions from the due torri: Walk up Via Zamboni towards the University. About half way up, turn right on Via Belmeloro - this is the first right hand turn after passing the Opera House (on Via Zamboni), which will be on your left. The Belmeloro University complex occupies the fourth block on your left.

Tuesday night Conference Banquet, July 4, 8pm
Cantina Bentivoglio
Via Mascarella, 4/b, Bologna
GPS: 44.498171, 11.349154
Google Map Link
This cantina is approximately halfway between the city center and the rim, and halfway between Via Zamboni and Via Inerio. Walking directions from the due torri: Walk up Via Zamboni towards the University. About half way up, turn left on Via Giuseppe Petroni. If you pass the Opera House on Via Zamboni, you've gone too far. After two city blocks, turn right on Via delle Belle Arti and then take your first left on Via Mascarella.

Plan of the conference venue 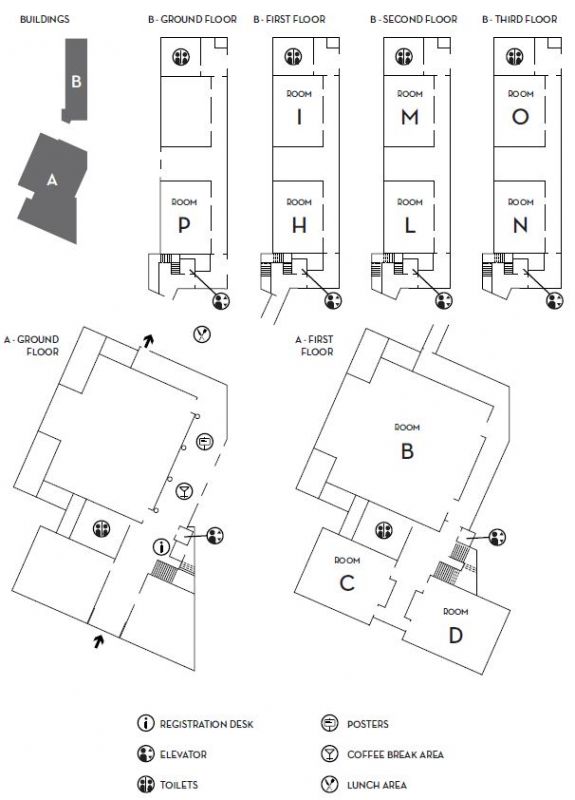